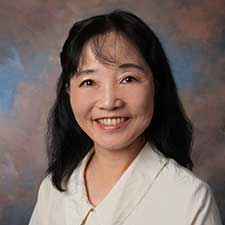 Chiaki graduated from Kobe-Yamate University School of Music in Piano Performance. A native of Japan, she joined the APA Chamber Music Association after graduation and continued to study Piano Performance and Chamber Music. Chiaki was on the faculty of the Yamaha Music School in Kobe, where she also worked as a chamber musician and accompanist. Following a move to Ohio, she worked as an accompanist for a Suzuki cello studio in Columbus as well as accompanying for other studios and recitals. After moving to Detroit, Chiaki worked as an accompanist for the Suzuki Royal Oak Institute of Music in Detroit and other string studios, including those of Anthone Eliott and Caroline Coade at the University of Michigan. The students she accompanied played in competitions and master classes, including one by Yo-Yo-Ma. Chiaki has accompanied most of the instruments, including voice. She is a Suzuki mom to two children (cello and piano; and viola) who are now majoring in music in college and love chamber music. Chiaki joined the Preucil School in 2013.
X