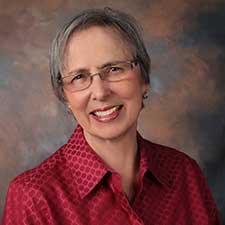 Gloria is a graduate of the University of Iowa Department of Music with a Master’s Degree in Voice Performance. She studied with Prof. Herald Stark who was a legendary pedagogue in voice, as well as with Prof. Albert Gammon. While at the university she performed leading roles in the Opera, including “Suor Angelica”, Micaela in “Carmen” and Tatyana in “Eugene Onegin.” She was also the understudy for Martha Shiel in the New York City Opera’s production of “Madame Butterfly.” After graduating she taught voice for many years at both Coe College and Cornell College and performed in and was music director for a number of Riverside Theatre productions. She was active in the Iowa City Community Theatre and music director for local fundraisers. She continued to study with Thomas Hauser of Scranton, PA, Perl Wormhoudt of Oskaloosa, IA and Rudolf Knoll of Salzburg, Austria. She also attended a number of summer workshops for teachers of singing at Marywood University.