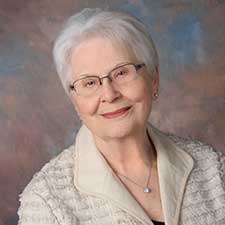 Doris is the founder and Director Emeritus of the Preucil School of Music. An honors graduate of the Eastman School of Music, she was a violinist with the National Symphony and the Rochester Philharmonic. She has served on the faculties of Western Illinois University, the University of Northern Iowa, and Interlochen Arts Camp, and performed and presented workshops throughout the United States and in Canada, Europe, Australia, Japan, and Korea. A Suzuki teacher since 1963, she is the author of the Suzuki Viola School, and a Past President of the Suzuki Association of the Americas. She was named “Teacher of the Year” by the Iowa String Teachers Association in 2005 and received a Lifetime Achievement Award from the Eastman School in 2004.